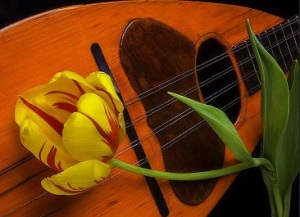 Cathryn was born on October 14, 1919 in York, York County, Pennsylvania to the late Charles and Lulu Wherley Sterner.  She was a member of St. Paul’s Lutheran Church in Dillsburg.

Cathryn grew up on a small farm in the Dillsburg area and learned at the age of 6 years to play the mandolin along with her family band.  They played at church functions and festivals, they even played on the radio.  She learned to play all the string instruments including the guitar, banjo and her favorite, the violin.  She also enjoyed playing the organ.  She played until her marriage to Lester.  After that she worked by his side in many business ventures including The Range Motel, The Range Restaurant (currently known as The Roadway Inn and Devil’s Eye Brewing Co.) and the Village Shops on Route 15 in Dillsburg.  She got back into music after Lester’s death in 1977 and enjoyed many years of playing and dancing at Franklintown Fire Hall’s Bluegrass jam sessions.  She was known for her western outfits, boots and hats and continued playing the violin until she reached the age of 100.  She enjoyed sewing, crocheting, playing Chinese Checkers and Scrabble.  She especially enjoyed a cup of mint tea with her 3 girls.

A special thank you to her dedicated caregivers for their love and support that allowed Cathryn to remain in her home that she loved so much and to Hospice of Central PA who were a tremendous help.

A Private burial will be held at the convenience of the family.

Memorials in Cathryn’s name can be made to the Hospice of Central Pennsylvania,  1320 Linglestown Rd, Harrisburg, PA 17110.

To send flowers to the family or plant a tree in memory of Cathryn (Sterner) Byers-DeFord, please visit our floral store.

You can still show your support by sending flowers directly to the family, or by planting a memorial tree in the memory of Cathryn (Sterner) Byers-DeFord
Share a memory
© 2022 Cocklin Funeral Home, Inc.. All Rights Reserved. Funeral Home website by CFS & TA | Terms of Use | Privacy Policy | Accessibility