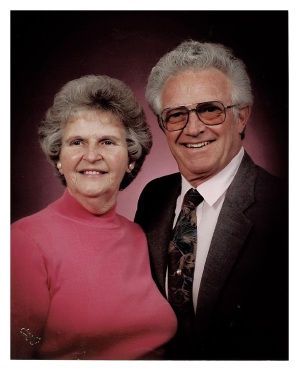 James "Jim" Monroe Gutshall, 89, passed away March 18, 2022, at home surrounded by his loving family after a ten year battle with cancer.

He was born September 27, 1932, in Lancaster, PA to the late Ola Merle and Ada (Snyder) Gutshall. They moved to Blain where he worked on his parents farm and graduated from Blain Union High School in 1951. He met the love of his life, Nancy, in Harrisburg at a dance being held by nurses. They married September 28, 1957, selling his steer to pay for the honeymoon.

Jim worked for the PA Aeronautics Commission as an equipment operator and mechanic until 1967. He then drove tractor trailers for Central Penn Air Freight, worked for Trans World Airlines as lead ramp supervisor, and started a landscape business. When TWA went out of business, he worked full time landscaping with his son. He enjoyed family get togethers, bus trips, travel to Europe, date night every Friday evening, coffee break and his "kidney medicine" (a glass of wine every afternoon). He was the man, the myth, the legend.

The family would like to thank Hospice of Central PA for the excellent care they provided in their time of need and ask for donations in lieu of flowers be made to them at 1320 Linglestown Road, Harrisburg, PA 17110.

To send flowers to the family or plant a tree in memory of James M. Gutshall, please visit our floral store.