Share a memory
Obituary & Services
Tribute Wall
Read more about the life story of Nancy and share your memory.

She was born in McConnellsburg, PA, on October 23, 1938 the daughter of the late Charles Mathews and Hazel (Pine) Richards.

On October 23, 1956, in a 57 Chevy, with her father and the police in hot pursuit to stop the marriage that her father thought destined to fail, she eloped and married her sweetheart, Robert L. King on her 18th birthday.  The marriage lasted 57 years unlike the 57 Chevy where it all began. Robert preceded her in death on November 17, 2013.

Her greatest accomplishments and pride and joy were her children, at least they think so. Additionally, she gave of her time volunteering to serve the patients at the Harrisburg State Hospital, including serving the criminally insane population.  Her volunteer work also extended to the inmate outreach program where she helped facilitate Bible studies. When people would call for their mother, her children enjoyed asking their father whether mom was, “in prison or the state hospital,” that particular day.  They knew Nancy liked to keep people on their toes.

She leaves behind her children, Mark King and wife Lori of Duncannon, Dave King and wife Melissa of Carlisle; Kathleen Irwin and husband Greg of Deerfield, MI; Trisha Walters and partner Sean of Marysville; Jane Hamilton and husband Rick of Leesburg, FL; Bethany Wenrich and husband Ben of Dillsburg; 16 grandchildren, 6 great-grandchildren and baby Mya coming June 2023.  She is also survived by her sister, Rita Mathews of York.

She was preceded in death by an infant son; her sister, Agalia Asper; her brother, Charles Mathews; her great-granddaughter, Ruby Skye Pentz; and her grandson, Nicholas King Hindriks.

Her children loved her sense of humor, love for milkshakes, love for God, animals, Bobby Flay and Blake Shelton.

“And so, I have these words of wisdom for you, my family and friends reading this. Make sure you laugh a lot in life. Above all, stand by your family, love your family unconditionally, and you’ll have a beautiful life.”  - Nancy Jane King

A Celebration of Life ceremony will be held at the convenience of the family.

To send flowers to the family or plant a tree in memory of Nancy Jane (Mathews) King, please visit our floral store. 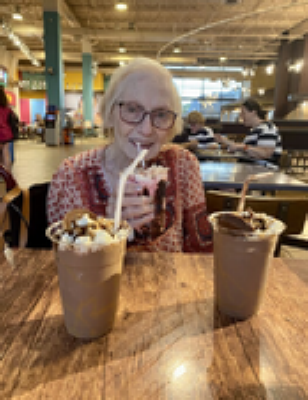 Look inside to read what others
have shared
Family and friends are coming together online to create a special keepsake. Every memory left on the online obituary will be automatically included in the book.

Look inside to read what others have shared

Family and friends are coming together online to create a special keepsake. Every memory left on the online obituary will be automatically included in the book.

You can still show your support by sending flowers directly to the family, or by planting a memorial tree in the memory of Nancy Jane (Mathews) King
SHARE OBITUARY
© 2023 Cocklin Funeral Home, Inc.. All Rights Reserved. Funeral Home website by CFS & TA | Terms of Use | Privacy Policy | Accessibility